The Effect of Tempo on Memory


This experiment was conducted to see if there is a link between the tempo of a song, and a persons ability to remember information. We hypothesized that increasing the tempo of  a song would hinder a person's memory and consequently, not allow them to remember as much.

To do our experiment, we created four sets of ten randomly generated characters, and then we would each set to the participants and asked them to repeat back the characters they saw. For the very first test, it was silent with no music playing. this was our control test, to see what the base score was. Then the next three tests were accompanied with a song; a slow song at 74 bpm, a medium song at 110 bpm, and a fast song at 165 bpm. after we recorded the data, we began to formulate our answer. We concluded that the data did not support the hypothesis, and did not give a definitive answer. However, we did question that if with better tests and research, that a possible discovery could be found about two different types of brain function because of clues in the data we received. This including that all of the participants either improved or worsened but did not stay constant during the tests.

In this experiment, we tested if the tempo of a song had any effect of a person’s memory, such as making easier or harder to remember.

If the tempo of a song affects a person's ability to remember then the songs with the faster tempo with decrease the amount of items that can be recited because the faster tempo will interrupt the thought process more frequently.

In the experiment, a pattern was not found within the data that we collected. This conflicted with our hypothesis: The faster the tempo of the song, the less someone will be able to remember. While this might suggest that the data proves nothing, it is possible that there is a deeper idea within this experiment that is not currently accessible to us with our current technology or education. Because we can see that in the data,  some people failed when the tempo increased, but other participants improved, but no one held the same score across the board. This could possibly suggest that people respond in two different ways to the tempo of the song, and as mentioned earlier, that would be difficult to test from our position. The fact remains that there may be a new discovery to be had, in this particular topic.

In this project, we were tasked with designing an affordable and effective water filter that had to be able to remove contaminated from water, including ammonia, human and animal waste, heavy metals, dirt and other particles, and microorganisms. 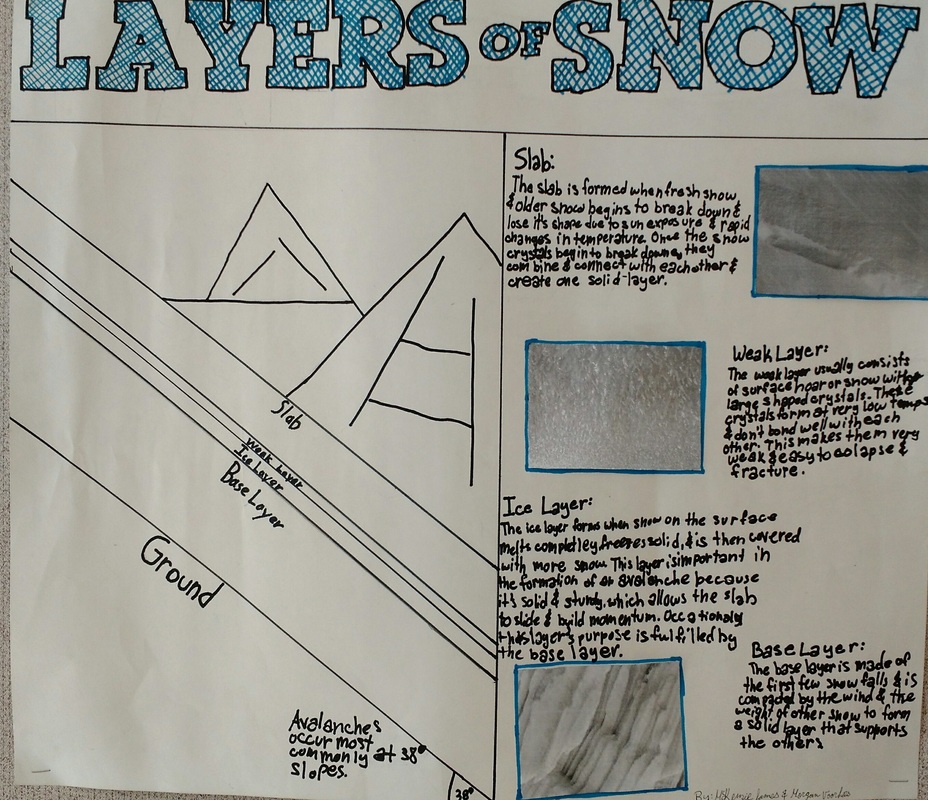 In the snow science projects we learned about many things pertaining to snow, including; the structure and properties of water, the formation of the different snow layers, warning sign of avalanches, distribution of water in the west, and precipitation patterns. We were asked to pick on of these topics, or a new related topic, and make a presentation explaining it, my group made a poster that explains the layers of snow that commonly cause avalanches.